By stroke of luck, I walked into National Design Centre after lunch during a typical humid afternoon and I was greeted by a breeze of freshness that was happening in one of the exhibition galleries.

On show was Jon Max Goh‘s graduate collection from Parsons The New School for Design. Titled ‘Nostos.algia‘, the collection features several androgynous look that carries his Asian sensibilities and roots so so well. From the beaded gold jewellery that reflected his Peranakan (Straits-born Chinese) origins to elastics that were used by Goh’s grandmother for making his pyjamas pants. Or the old curtains from his grandmother’s house to the incomplete cross-stictches by his mother. They were homage in Goh’s collection which I thought was warm, personal and genuine. 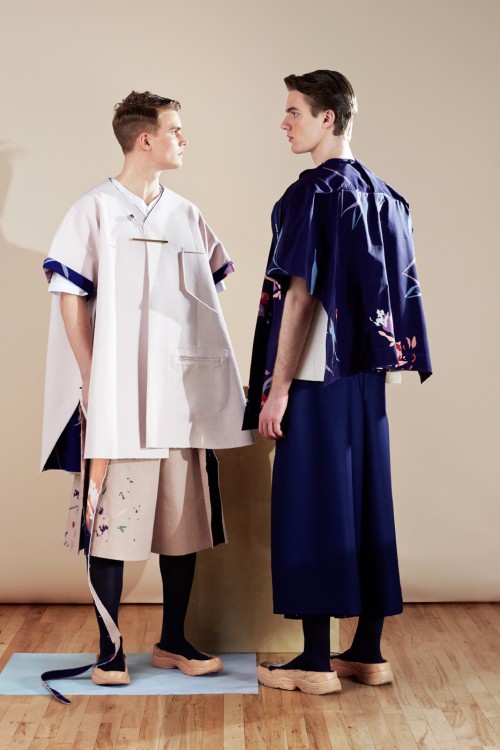 Goh’s eye for details was very impressive in my opinion. Fabric salvages, sheared fabric ends, raw hems and unique darts were cleverly placed and introduced, transforming the smallest detail on materials. It gave the collection a much needed break from the structure and layered looks. The collection is also quinesstential to the Asian culture. Exploring the many different traditional and ancient looks from Asia such as the Japanese Kimono, the South East Asia Archipelago and the Chinese Ma Gua, just to name a few. It’s insightful for Goh to challenge the notion of the modern man’s dress code. Why is it possible for men in the olden days to be able to don a kilt/ sarong where drapes and layers of fabric were explored. He blurred the boundaries of what man should wear and created a gender neutral collection apt for both male and female. It was the clothes that speak for itself with the values and cultures that Goh embedded. 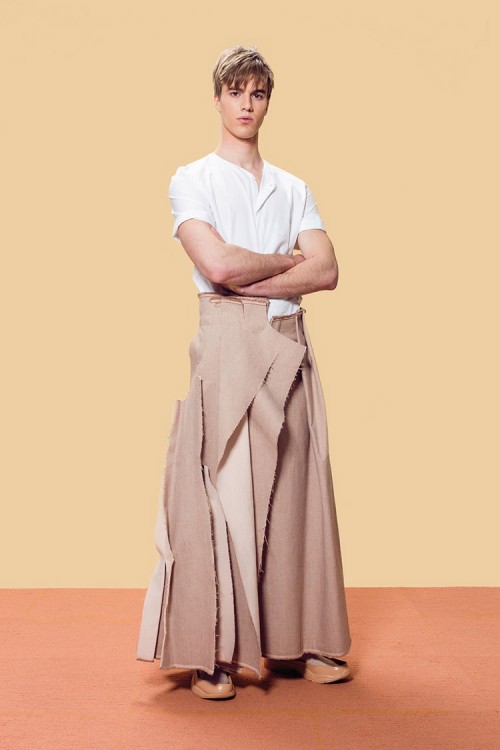 It’s been a while since a local designer has wowed me with such powerful collection and I’m so pleased that my typical lunch break has been made better by Goh’s refreshing take on Singapore fashion.

Goh was Parsons’ Menswear Designer of the Year (2015). He was recipient of the CFDA Scholarship Award (2014), and was one of i-D Magazine’s Top 10 Undergraduate Designers to watch. He was also featured in Vogue Italia and BeMovement, an SG50 publication. A DesignSingapore Scholar (2011), Jon earned his B.F.A. in Fashion Design from Parsons The New School for Design and continues to pursue his craft in Brooklyn, New York.

The exhibition is part of Carrie K’s Pop Up finale at National Design Centre.

Tiger Beer came up with the world’s first ink, Air-Ink, made of pollutant particles. They teamed up with a group of artists from Hong Kong to uncage the brand on…

Zim&Zou are two french artists, based in Nancy. The duo is composed of Lucie Thomas and Thibault Zimmermann who studied graphic design (design, publishing, advertising) for three years. The duo then decided to…

Previously mentioned in my post here, James Ostrer is now back with a new series of work featuring meat and celebrities and of course with his signature on it. In his…

Creator Susan McLeary imagines amazing jewels from succulents she collects at her family’s greenhouse. The plants resist for 2 - 4 weeks before they die and you can remove them…

For the past two months, Ai Weiwei has been working from the Greek island of Lesbos, documenting the waves of refugees landing on the island after they battled the merciless…

In my humble opinion, it takes guts and determination in wanting to initiate a social and ecological change through fashion. And once in a while, a designer like Bethany Williams comes…

Cover Image Credits: amfuku.com By stroke of luck, I walked into National Design Centre after lunch during a typical humid afternoon and I was greeted by a breeze of freshness that…